skip to main | skip to sidebar

With each passing year, the ranks of surviving WWII veterans continue to dwindle.  My father is one of those veterans, now in his 89th year.  When I was growing up, he rarely spoke of his experiences in the war.  It is hard to say why, but I suspect the ongoing pressures of a career and raising a family were simply more important than taking the time to talk about the war.


And today, suffering from dementia, it is difficult for him to recount his wartime memories, that chapter of his life now locked away from the rest of the world in an aging mind.  Fortunately several years back I recovered Dad’s navy scrapbook.  It provides a significant glimpse into this period of his life and tells the story of a crew of young men and their ship, all of who played such an important role in making possible what we enjoy today.

My dad, Ron Bailey, joined the Royal Canadian Navy at H.M.C.S. Unicorn (Saskatoon) on April 19, 1943, two days before his 19th birthday.  They called these young men Prairie Schooners, most of them having never even seen an ocean.  After enlisting, he was first posted to H.M.C.S. York (Toronto) and then to H.M.C.S. Cornwallis (Digby, N.S.) for training.  After Cornwallis, he was sent to H.M.C. Signal School in St. Hyacinthe, Quebec where he qualified as a telegraphist.   With his training complete, he was then sent overseas on the S.S. Nieuw Amsterdam sailing from Halifax for Greenoch, Scotland.
The Nieuw Amsterdam was a large ocean liner that had been converted for troop service.  In this configuration, what was once the luxurious first class dining room was completely filled with bunks stacked three high to accommodate the young men going to war.  Many would not return.  During the war years, the Nieuw Amsterdam transported 378,631 troops, sailing some 530,452 miles.  She survived the war unscathed and subsequently plied the oceans of the world for Holland America Line well into the 1970's.

From Greenoch, Dad was posted to H.M.S. Ferret in Londonderry where he was drafted to serve on the H.M.C.S Matane.  The Matane was a River Class frigate, built by Canadian Vickers Ltd. in Montreal, Quebec.  She was launched on May 29th, 1943 and commissioned on Oct. 22, 1943, her pendant being K444.
In April of 1944 she joined escort group EG9 as the Senior Officer’s ship and served mainly on escort and patrol duty in U.K. waters.  On July 20th, 1944 the Matane was hit by a German bomb off Brest in the Bay of Biscay and was badly damaged.
Three crew members were killed and several others injured.  After eight months of repair in Dunnstaffnage, Scotland the Matane was again ready for action in early 1945.  It was at this point that my Dad joined the crew of at least 140 other crewmen in Londonderry.

Arguably the most significant event in the life of the H.M.C.S. Matane is well detailed in my Dad’s scrapbook through pictures, officer's reports, and naval messages.  On May 13th, 1945 she set sail from Greenoch, Scotland to escort convoy JW67 to Murmansk, Russia.  On May 16th Coastal Command received a message from the Norwegian destroyer Stord stating “Have met German convoy steering 230 degrees speed 10 knots in Vestfjord consisting of 16 U-boats and 5 merchant ships.  They say they are routed Narvik to Trondheim.  Is this in order?”  Shortly thereafter, a message was received from Admiralty, “Captain (D)17th is to detach one escort group forthwith to intercept convoy of 16 German U-boats and 5 merchant ships reported in Vestfjord.  U-boats are to be escorted to Loch Eribol and merchant ships to be directed to Trondheim.”
EG9, including the Matane were split away from convoy JW67 and sent to intercept the subs.  Though hostilities in Europe had ended just days before, it was unclear what reaction the German U-boats would have to being intercepted.  As it turned out, there were 15 U-boats and five merchant ships.
Two of the merchant ships were quite notable, one being the Aviso Grille, Hitler’s one time personal yacht, and another being the Stella Polaris, a luxury Norwegian cruise ship that had been seized by the Germans in 1940.  The Germans surrendered peacefully.
Boarding parties were arranged and surrender terms were dictated to the German crews.  The Senior German Officer of the convoy was Captain Suhren (Iron Cross and Oak Leaf 39) who on request stated that he was Senior Officer Arctic and Barents Sea and that this was the last of his command.  Under orders of the German High Command he was withdrawing his Command from Narvik and proceeding to
Trondheim.  The Canadian boarding officer from the Matane asked if the Senior German Officer had read and understood the terms of surrender and if his U-boat commanders also understood these terms.  Captain Suhren stated that all ammunition had been landed, no mines were carried, pistols were removed from all torpedoes and that Commanding Officers of the U-boats would comply with the terms of surrender.  He was then ordered to inform his U-boat commanders that if any attempted to scuttle or submerge, the boat would be destroyed and no mercy would be shown to the crew.  Captain Suhren was granted one last request.  He sent a final message to all of the U-boat commanders, “Farewell my U-boats, we have worked well together, don’t be downhearted.  Goodbye.  Suhren.”

Although fraternization between the German and Canadian crews was strictly forbidden, it appears that socializing took place with the seaman from the two countries trading money and badges.  I suppose that it won't blemish my dad's navy record to now admit that he took part in this fraternization.  His scrapbook contains German bills that he received in trade for Canadian paraphernalia.  It would be interesting to know if any of these bills have any value today.

EG9 and the Matane successfully escorted the German U-boats through very rough seas to Scotland.  It was a 36 hour passage.  Though the war in Europe was over, this was not to be the Matane’s last duty.  Her final engagements were escorting convoys between the U.K and Gibraltar.  Navy authorities considered that all U-boats were not accounted for and there could still be U-boats turned rogue on the prowl.  Thus convoys continued to be used after hostilities had ended.  In a recollection of the final engagements of the Matane, an officer from the ship wrote:

“The next day I received a general message from the Admiral stating that all available officers and men had to be on the jetty at 1400h to be marched ashore.  This was a mystery; however, we did as we were ordered and mustered on the jetty at the appointed time, leaving only a skeleton crew aboard.  At 1400h sharp a Chief Petty Officer from the Royal Navy met us and informed me we had to march to the local theatre and he would show us the way.  After questioning him it was obvious he knew as much as I – nothing.  When we were seated in the theatre with the other ship’s companies the Admiral appeared on the stage and informed us he had just received uncensored films from the German concentration camps.  He felt that there were horrible sights, but assured us we had a right to see them to give us a better understanding of what we had been fighting for.  He was right, they were horrible.  On the way back to the ship the men were silent, and even today, 40 years later, I still get vivid flashbacks of those scenes.  I don’t regret seeing it, as I felt some of the younger men hadn’t a clue what we had been fighting against.  Some time later, one of the seamen said he “didn’t understand it, as those guys on the subs seemed like decent fellows”.  I didn’t attempt to enlighten him as I knew I would get out of my depth.  However, it is my understanding that not one seagoing German seaman was ever tried for war crimes.”

My Dad was part of the Matane's crew at that point in time.  He has never spoken of seeing the film.

On June 17th, 1945 the Matane sailed from Greenoch escorting another convoy bound for Gibraltar.  Just south of Ireland the ship received a signal detaching the Matane from the convey and ordering her to Esquimalt, B.C., likely in anticipation of the ship being required for the war with Japan.  In early July, after sailing through the Panama Canal and a five day stop in San Diego, California, the Matane arrived in Esquimalt.  Over 40% of her crew had volunteered for Pacific action, but it was not to be.  Two nuclear bombs sealed the fate of the Japanese and the war was over on August 15th, 1945.  Dad was discharged from the navy on November 19th, 1945.  He went on to a successful career, raised a family, and has lived a rich and rewarding life.  When I look at Dad, the men and women of his age, and what they have accomplished and left behind, I truly feel that they have earned the title of “the greatest generation”.

As for the Matane, she was paid off into reserve in Esquimalt on February 11th, 1946.  She was sold in 1947 and her hull was ingloriously sunk in 1948 to form a breakwater in Oyster Bay, B.C.  She acted as a breakwater until 1973
when she was deemed either an eye sore or navigational hazard and blown to smithereens.  Despite this final insult, a picture that I found on the web reveals that there are still remnants of the Matane that can be seen at low tide in Oyster Bay.  I intend to take my son there next summer, to see if we can salvage even a small piece of scrap iron to keep with my Dad’s scrapbook.  If we are successful it will act as a lasting reminder of a fine ship and her proud crew, and a significant chapter in Canadian history. 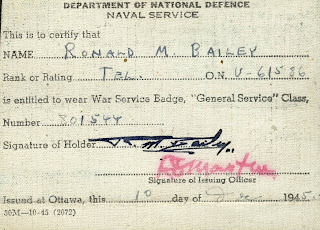 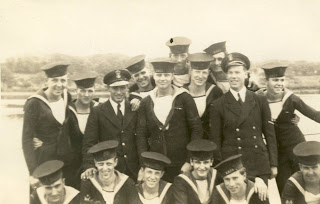 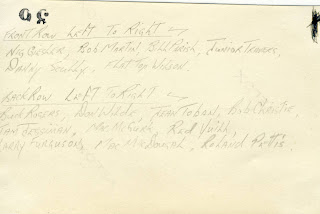 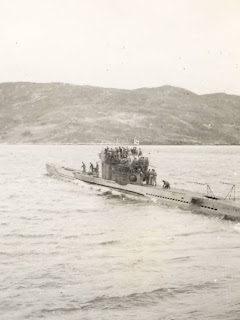 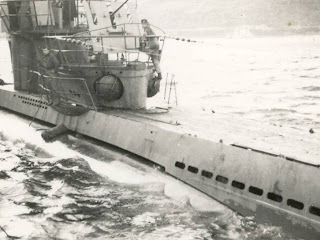 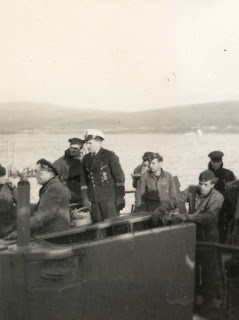 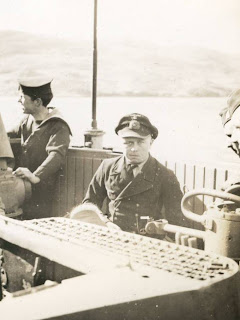 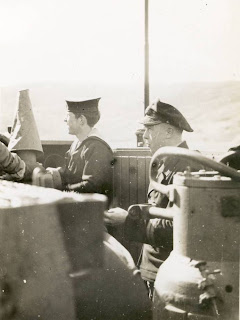 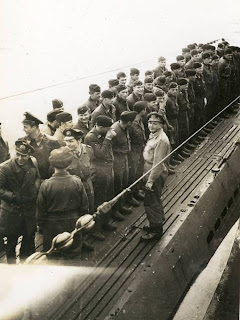 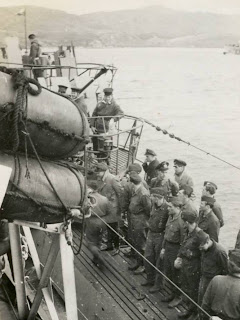 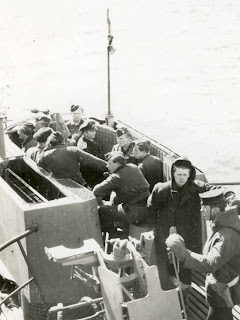 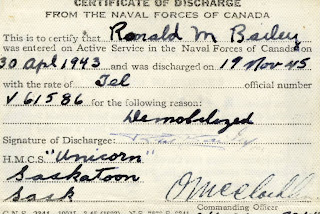